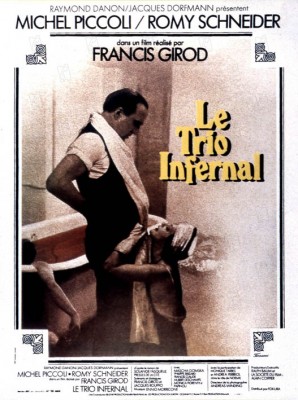 In 1919 in Marseilles, George Sarret, a crooked lawyer and war hero, his girlfriend Philomène and his sister in law and lover Catherine, specialize in life insurance frauds.

For his first feature film, Francis Girod brings to the screen a sordid real life story, and offers us a decadent portrait of three lovers turned murderers in a Europe barely recovering from the wounds of the Great War. With his two partners Romy Schneider and  Masha Gomska, Michel Piccoli delivers a superb and wild actor’s performance, set to music by the great Ennio Morricone and co-written by Jacques Rouffio  (The Sugar, Seven Deaths by Prescription).  Inflammatory !

If there’s an amoral, immoral cinema, here is a tumoral film, in the sense that it tries to circumscribe, palpate and weigh a tumor, a big fat lump stuck deep in the heart of french society, that devoured it whole, guts and soul. It’s name: The First World War. We’re in 1919, France rests in peace. After having much expired, the French inspire at last, the dead are honored, business starts up again (but had it really stopped ?) Caught on the side of death, back from the trenches with medals and scars, George Sarret (Michel Piccoli) a lawyer, along with the Schmidt sisters (Romy Schneider and Mascha Gonska), organizes infallible insurance frauds. Going beyond the blackest humor of some italian or british productions, and past the grating cynicism of certain rare french films (Chabrol’s Landru, 1963), Francis Girod (it’s his first film) creates a swinging, slimy, beastly and suicidal movie. The pounding is absolute : the bourgeoisie, the church, the army, politics, everything is trashed. Moreover, if after Psycho a shower made you hesitant, after The Infernal Trio a bathtub will be out of the question. Brace yourself !