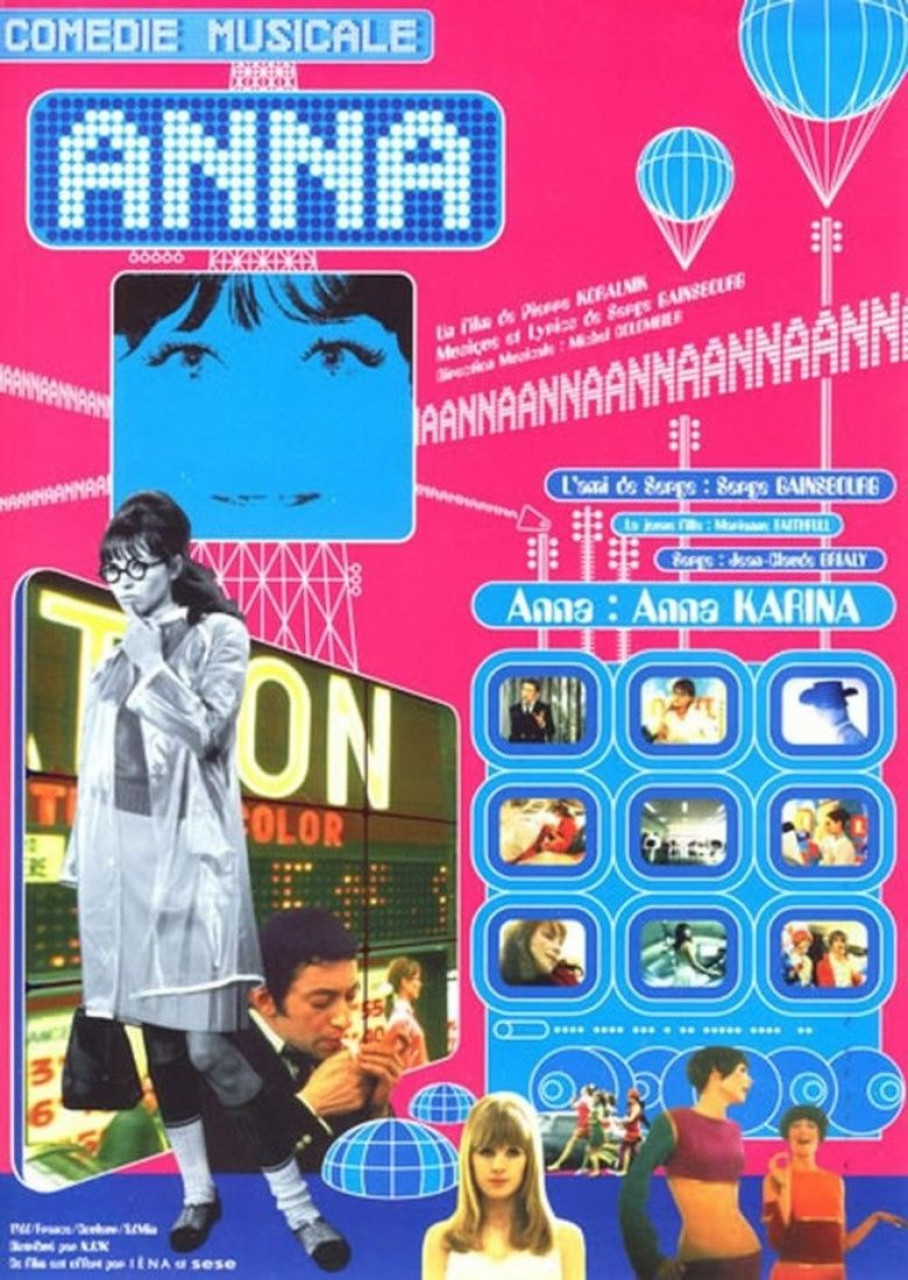 Serge, the shy boss of an advertisement company, by chance photographs a young woman in a train station. He instantly falls in love with her. But the beauty vanishes. With the help of a friend, and requisitioning his whole crew, he'll do everything he can to find her in a wild adventure full of twists and turns...

Where does the famous song "Sous le soleil exactement'' come from ? In Anna, you'll be able to hear it in its original setting. Check out the cast: Anna Karina in the title role, Jean Claude Brialy, Serge Gainsbourg, Marianne Faithfull...

Photography is by Willy Kurant, head cameraman for Agnes Varda and Jean-Luc Godard. Made for TV, this film commissioned by Michel Arnaud for the ORTF, was shot in Paris in 1966, in public, with loudspeakers playing the soundtrack in the streets to the amazement of passers-by. Anna is a sort of ideal musical, sweet, carefree, reeking of freedom, and typical of Serge Gainsbourg's rebellious spirit, also the composer of the musical score : songs in rhymes, with their sharp word games, with arrangements and orchestrations already by Michel Colombier, who in 1967 will collaborate with Pierre Henry on "Messe pour le temps présent", something you can sense when you hear the first measures of "Roller Girl" !  Though the film fits into the period when Demy's cinema explodes (Les Demoiselles de Rochefort will be released a few months after Anna's broadcast), Koralnik is more influenced by English pop music and it's wild outfits, where the present mutates into science fiction. Victor Upshaw's choreographies strongly break away from what was being done in France at the time. It's hard not to be swept away by this communicative and joyous breeze.

Screening in partnership with the INA

Before being a film, for me Anna was my first LP. As a child, holding up the sleeve, I tried to imagine the story from the three photos at my disposal, the few lines of text and the lyrics of Gainsbourg's sixteen songs.

This musical comedy produced by Michelle Arnaud for the ORTF's channel 1 was broadcast only once on the 13th of January 1967. An invisible film that I discovered only in 1989, when I was searching for rare imagery for Canal+'s Night of the Moon. I had booked an editing studio at the INA in Bry sur Marne. I was with my brother who like me knew the songs by heart and we had to put markers on the 35mm copy to select excerpts. The editor, seeing we had no intention of leaving the room, allowed us the pleasure of letting the reel roll on so we could finally discover this mythical film. It was a shock ! There were more songs, one of which was sung by Marianne Faithfull, a brilliant choreography by Victor Upshaw, psychedelic pop arrangements by Michel Colombier (a collaborator of Pierre Henry), and the gorgeous Anna Karina, a total artist, seductive and funny. I saw the film again later on DVD, but it'll be the first time I'll rediscover it in a theater with an audience.