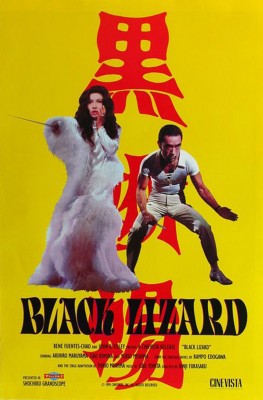 Lady jewel thief the Black Lizard is feared all over the country. In order to demand a ransom from her father the millionaire banker Iwase, she kidnaps his daughter. The banker hires a private detective, Akechi Kogoro, to free his daughter.

By adapting a story by famous japanese writer Edogawa Rampo (The Blind Beast), the brilliant multi-talented Kinji Fukasaku (Graveyard of Honor, Battle Royale) delivers his zaniest film. While paying tribute to pulp cinema ( from Fantomas to italian cine-fumetti like Diabolik) he gives the main part to transexual actor Akihiro Miwa, and a small one to writer Yukio Mishima who would adapt the story on stage the next year.

The Black Lizard is a merciless criminal, greedy for diamonds, and an aesthete in cruelty. She has the daughter of an industrialist kidnapped to obtain in ransom the Star of Egypt, an invaluable gem. The great detective Akechi enters the scene… The plot comes from a novel by Edogawa Rampo, a pioneer of japanese detective novels.

In a wide scope format, Kinji Fukasaku’s baroque directing makes use of a flurry of saturated colors, brutal zooms, odd framings and pop atmospheres, supported by a psychedelic soundtrack. He adds up musical comedy, ero-guro (grotesque erotica), a taste for the morbid and kitsch. Mishima himself appears in a stupendous gallery of statuefied humans.

But the main character, as iconic as Fantomas or Mario Bava’s Diabolik is The Black Lizard, played by  Akihiro Miwa, a famous cabaret transvestite and Mishima’s lover, whose magnetic presence is fascinating. She infuses a camp dimension to this decadent manic series, which holds a place apart in Fukasaku’s career, whose specialty was yakuza movies.